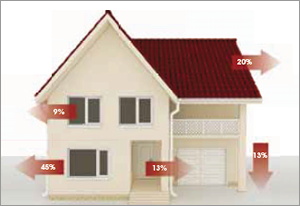 Over 30% of the UK housing stock have been built with solid walls – classed as ‘hard-to-treat’ because they cannot be thermally improved with the use of cavity wall insulation.

Unlike unfilled cavity wall homes which lose approximately 35% of heat through their walls, solid wall homes will lose as much as 45% heat through untreated walls. Any measures to make heating systems more efficient are made less effective as heat escapes through the external walls.

SPS Plasterers are approved Weber External Wall Insulation installers. This is suitable for both traditional and non-traditional housing and can significantly lower heating bills and carbon emissions as well as revitalising the appearance of homes and the local area.

There are approximately 2 million properties in the UK which were built using non-traditional building methods, most of which were constructed between 1939 and the 1970’s and were built for speed and economy of construction and not for thermal efficiency.

The main building methods employed were either in-situ or precast concrete, metal or timber frame. Although most remain structurally sound, they are extremely poor at retaining warmth, resulting in problems with damp and condensation as well as high heating costs and carbon emissions.

Weber EWI systems by SPS Plasterers have been installed on most non-traditional housing types. Technical advice can be given on the most appropriate systems for each housing type and on-site inspections can be made of work-in-progress to ensure that the work is completed to specification.

Contact SPS Plasterers Ltd today on 01782 860 167 or 07748 085 357.
For a free quotation or to discuss any of your plastering or rendering requirements please email simon@spsplasterers.co.uk